I was born in rural East Texas in the early 50's. Where and when I grew up, there was no kindergarten and no pre-k. I started my education in the first grade and art projects starting in about the third grade (as I remember) consisted of carving shapes out of floating bars of soap and making things from popsicle sticks. There were no art classes beyond that. In secondary school, I started drawing and later in high school I played around a bit with watercolor, having a small show at the yearly celebration of the yam in Gilmer, Texas---The Yamboree. I kid you not. :)

I drew my first unusual drawing in the late sixties while I was in my late teens and still in high school. It was a humanoid whose body came to a point with no legs to speak of. One of its arms penetrated his chest, the other reached upward, pointing. I was writing a lot at the time, and I remember pasting it to the inside cover of a manuscript.

Borne of doodles, transcending conscious thought, my drawings could be described as the graphic equivalent of 'automatic writing.' I have no idea where the drawing will take me, nor do I try to direct it initially. Once a 'feel' is established, the drawing/painting takes shape with as little help from the left side of the brain as possible. You could say I try to attain a dream-state though wide awake in my pieces.

A break-through of sorts occurred in the early seventies. While at the University of Texas at Austin, I did a series of drawings with a recurring character. It was bat-like, but no bat. It had no head, just two antenna-like protrusions. There were no legs, but two spheres hung from cords. I christened it "The Flying Mystery." Though an English major, I did have some success in the visual arts during this time. I contributed illustrations to several literary magazines and had a mini-show with several others at the University's Union bldg.

It was only a few years ago that the landlocked counterpart of this skylocked one emerged. The gap in the time-line can be explained, I think, because for many years I did little drawing. Now I draw every day. Art for me has always been a voyage to discovery. And what am I attempting to discover, you ask? Myself as sentient being, of course.

Addendum: It was not until 2013 that I came up with a label for my type of work. I am tentatively calling it Intuitive Expressionism, since the majority of my work wells up from some emotively-charged unconscious area. A search engine gives me nothing to make me think I am part of a greater whole, and that is probably part and parcel of what makes my art what it is, I'm afraid. But now I can answer people who ask me what kind of work I do. It is not truly surrealism after all and it is not abstract expressionism by any means. And even Salvador got kicked out of the Surrealists' club after a time. :)

Addendum II: Just in case there's some confusion on the casual reader's part regarding my method, I wish to clarify a little. I do not consider my work to be 'mediumistic' or the product of channeling long dead ancestors, some past life or dead culture. I merely attempt to cut away the superfluous and reveal imagery that is uniquely my own. By doing the one-minute (or less) sketches either on paper or by using my little magnetic tablet, I am attempting to reveal a purity of form that I feel a strong connection to. I'm also of the opinion that by doing these quickly and without premeditation, I have (sometimes) gained access to something beyond the conscious mind, an undercurrent of thought and/or emotion if you will. The experts say we use on average only 10% of our mind's true potential, so who's to say what is or isn't possible if one could tap into an extra percentile or two? :) Did this clarify or muddy? Let me know.

PERSONAL NOTE: I welcome comments/critiques of a constructive nature. I have never faulted anyone for honesty. Please note that I may comment on yours in like manner though strained through my own unique mind-set and sense of humor. I will NEVER make a comment calculated to demean or belittle either the artwork or the artist. And retaliation/rebuke I leave to those with smaller minds than mine.

ARTIST'S STATEMENT: I believe art is just another language that we use to communicate with one another. As humans we wish more than anything else to be understood by others and by ourselves. It is for this reason that we speak, write, draw, paint, sculpt, etc. Sometimes the language of art is simple and direct, sometimes obscure and visually encrypted because, as much as we wish to be understood, we are hesitant to expose our most tender parts to a largely indifferent planet. I truly believe all humans to be artistic to some degree, because we all yearn for that same appreciation/acknowledgement of self.

The vocabulary of our artistic endeavor may differ, but the end goal is the same. We wish our visual/verbal interpretation of reality to add to our general knowledge of the world, and simultaneously, to a better understanding of our place, as individuals, within it. 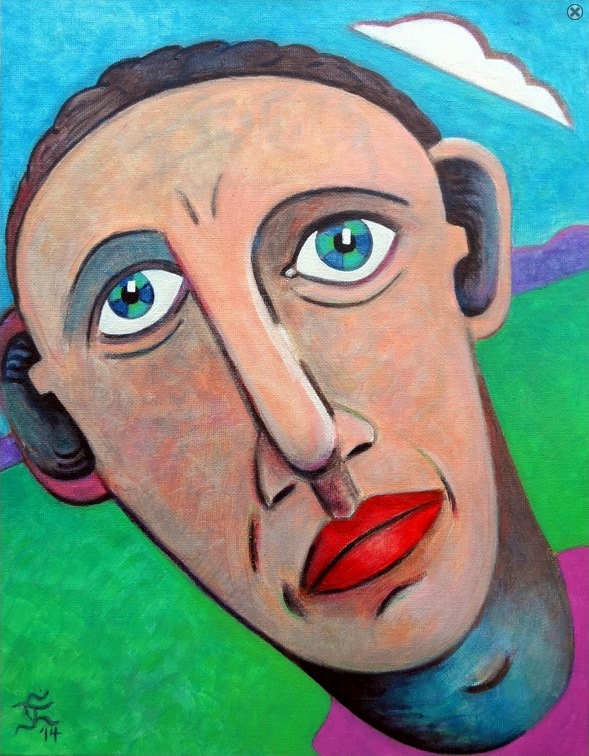